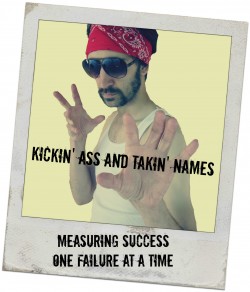 Written and performed by Seth Lepore

Success. Failure. Are these merely outdated concepts or very real measurements of what it means to be human? Lepore uses his favorite 50/50 formula of absurdity and sincerity to up the ante on solo theater and challenge his audience's perceptions of what theater is supposed to look like.

The imagination of the audience influences the direction of the twists and turns each night. Pre-show Lepore interacts with participants asking for suggestions on index cards that he uses as springboards to create new characters on the spot. Using a stream-of-consciousness approach, Lepore builds characters that are steeped in hundreds of hours of research and interviews on what success and failure mean to people in terms of money, career, relationships and social status.

People walk away in disbelief, wondering how the show could be completely unscripted. Both thought-provoking and snort-laugh inducing, Lepore gets to the heart of what it means to make a mark on the world. Using transparency as his model he embraces the flaws and strengths of the current economic hurdles of being a full time performer. Through this lens, Lepore presents a vulnerability that remains both theatrical and entertaining.

“Sometimes the scene itself is funny; sometimes it is the randomness and sheer absurdity. And very frequently, it’s just because Lepore has a great stage presence, and has such an intensely physical style that it’s impossible to stop staring at him.” -Aisle Say Twin Cities