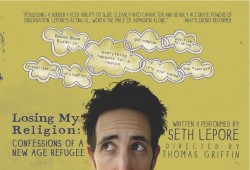 Losing My Religion: Confessions of a New Age Refugee
An hysterical romp through America's spiritual enterprise.

“Losing My Religion” is a humorous, ironic and sardonic look at what Lepore describes as “the blurry line between self-help and faith.” Based on his own spiritual journey, which saw him leave the Catholic Church as a teenager and meander for over 20 years through Buddhism and a host of other isms, the monologue juxtaposes wickedly funny and insightful characterizations of the people he has met along the way with thoughtful commentary on his own spiritual seeking.

The intention of the piece is to create an ongoing dialogue that presents more questions than answers in terms of how we approach faith as a culture. One of the top 10 plays of 2011 by the Twin Cities Daily Planet.

"The writing and ideas here are smart, fresh, and stimulating, and Lepore's precise acting hammers them home… Lepore manages to evoke each of the disparate folks in this show with subtle but distinct changes in his physicality. I'm not quite sure how he does it, but he actually looks a little bit different as he assumes the mantle of each of his characters." -nytheatre.com

“Part of your brain is reminding you that this is a… show mocking exploitative “self-help” programs, but another part will be telling you to sign up for what the gurus are offering. That’s the strange danger of these characters, and Lepore conveys it with a precise, polished, unfailingly entertaining performance.

One mark of a quality show is how often you find yourself referring back to it when critiquing other shows. This one-man show…demonstrated how satire is sharpest when you don’t underestimate your target. Lepore’s portrayals of shady self-help gurus were completely compelling, all the more so because he wasn’t afraid to let their seductive charms ooze through their ludicrous rhetoric.” -Twin Cities Daily Planet

"Lepore comes across a lone, common-man hero…Possessing a rubber-faced ability to slide cleanly into character and deadly accurate powers of observation, Lepore’s acting is... worth the price of admission alone." -Brattleboro Reformer