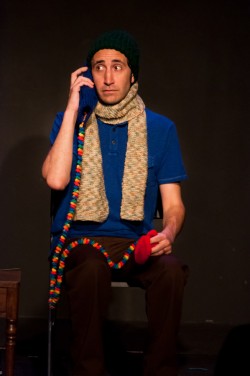 Firecracker Bye Bye
A Comedic Tearjerker About the Best Italian-American Grandmother. Ever.

Written and performed by Seth Lepore
Directed by Linda McInerney

Nationally touring solo performer Seth Lepore, who is known for his dynamic character acting and vocal elasticity, plays his most intimate cast of characters yet. Lepore uses a chameleon-like ability to shape shift between his family members with the animated subtlety that has become his trademark.

Lepore playfully prods the Italian-American obsessions of food, homemade sweaters and unfiltered discourses that border on the absurd. Through a vulnerable wit, Lepore shows how his grandmother became a second parent to him, leading to some of the most ludicrous and heartfelt moments of his life.

At once an embarrassing expose, twisted tribute and lamenting love letter, Firecracker Bye Bye is a comedic celebration of life amongst the inevitably of loss. From lasagna experiments gone wrong to crocheted eyesores, Lepore embodies his family's offbeat charm with grace and punch, leaving the audience both jealous and relieved that they aren't his relatives.

“Lepore’s new one-man show, Firecracker Bye Bye, is a tender and funny ode to his late grandmother Nonie. He’s a gifted performer with a rubber face; he can lucidly switch characters just by cocking his head and changing his expression… and this heartfelt show is just about impossible not to enjoy. Bring your grandmother—whether she’s alive, or simply alive in your memory.” -Twin Cities Daily Planet

“[Nonie] comes into sharp relief, in a… one-man show that is full of tender memories without being saccharine… Lepore focuses his talents on capturing the quirks and eccentricities of a relative we can all identify with…” -Providence Journal