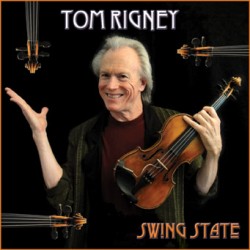 FROM THE LINER NOTES BY TOM RIGNEY:

I grew up in a house filled with swing music. Both my parents loved the music they had grown up with--The Mills Brothers, Artie Shaw, Tommy Dorsey, Ella Fitzgerald, Bob Scobey and Clancy Hayes, Bing Crosby--a long list of musicians who swung like crazy. That irresistible rhythm has been a part of my musical life blood ever since. Whatever style of music I have played at any given time in my career, I have always loved to make it swing.

This album is another extremely eclectic collection of songs and tunes--a few standards, a bit of Western Swing and ragtime, some Gypsy music, a taste of Dixieland, and a number of my original compositions. The single thread that runs through all these pieces is that they swing. If they don’t all come out swinging, give ‘em time because they’ll get there.

I have tried to pay homage along the way to some of the music I grew up hearing, and also to the music and musicians who influenced me in the early years of my career--my friend and mentor, Vassar Clements, Bob Wills, Chubby Wise, Django Reinhardt and Stephane Grappelli, The Mills Brothers. I hope I have succeeded in capturing a bit of their style and spirit.

But mostly this album is a loving tribute to the memory of both my parents--Bill Rigney and Paula Bruen Rigney--and to the joy they shared in the music they loved. Appropriately enough, it was swing music that brought them together in the first place. The guy who introduced them to each other back in 1944 was one of the swingin’est cats who ever lived--Vernon Alley, the great jazz bassist. Whenever I would see him over the years he would always laugh and say, “Little Rig, I’m the reason you’re here!” That’s good to know...